This year like previous year the Speed week organized by WHPSC at Battle Mountain has been cancelled. As a reaction the team Policumbent (Lucrezia) organized in the weekend of 23 and 24 Oktober the European speedbattle.  It took place in Italy on the circuit Stellantis Proving Ground at Balocco.Four teams have been invited. A French team, An English Team (AIM93), an Italian team (Policumbent) and a Dutch team(Elan).

When we received the invitation we have not touched the bike since riding at BM2019. It was collecting dust in our shop. We still needed to repair the damage from the flight home. We received some new record tires from Schwalbe, for this Hans made an extra set of wheels together with Peter Groeneveld. My main concern was the state of the window. It is old and has a lot of scratches but there is no replacement. Together with Gerard Arends and Hans Wessels we travelled to Italy a two day trip. We arrived in Turin at the University friday at 14:00. Here we unpacked the bike and inside the building I rode the first meters since Battle Mountain 2019 on the bike without the top to check everything was working. Also we had to fill in a lot of paperwork. Now we are all set to go to the track tomorrow.

Saturday morning we arrived at 8 o’clock and parked in front of the track. Some more paperwork & covid checks and we are allowed in. There was still a discussion on which lane to ride in. The person of the track took Hans Wessels in his car and Hans and I drove are own car behind his. After the lap we concluded that the second lane is the one to use. Hans Wessels measured the white dotted line on his folding bike with a measuring wheel & GPS. It was nice and sunny whether and I asked, if I could do a lap without the top. This was denied the track official did not want speedbikes to ride without the top. They were careful do to the fact that Vittoria had a crash without the top on. I was allowed to go back and forth in front of the finish line. This was enough to check the steerings alignment. We installed the Schwalbe tires. Everything was ready to do a first test with the top on. The track is a triangle with long corners. Setting of in the bike it was clear that the window would be a problem. In the long corner behind the start following the line was very difficult. The test made clear that we needed more time to fit the tires so they are completely round. 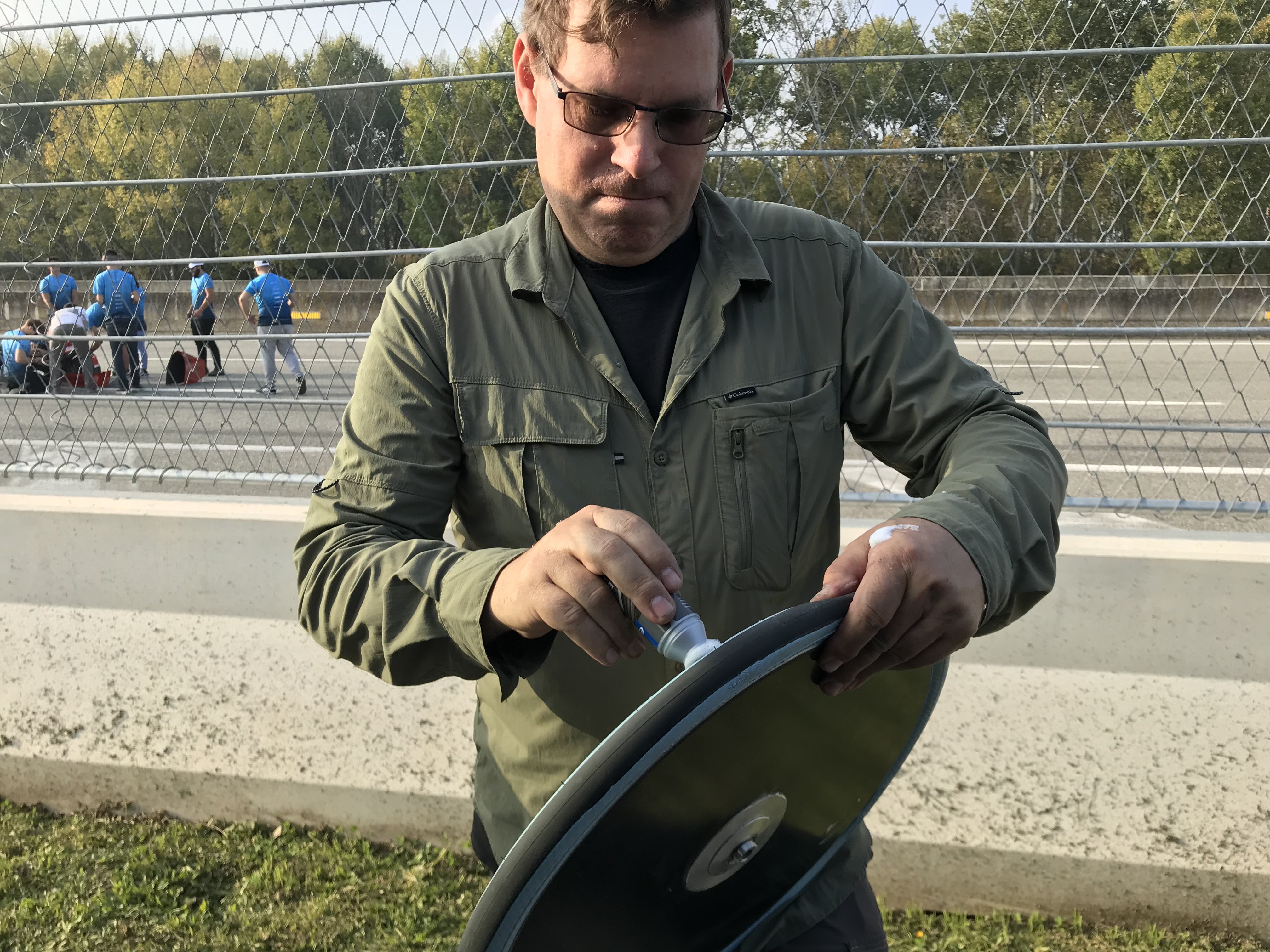 The bike started to bounch at 70 km/u. We swapped the tires for the blue Michelin tires. Now the other team did their tests. In the afternoon I started for the hour and 200m, but afer a few meters it was clear that the sun was to low, even in the car they could not see a lot. I stopped afer 1 lap and decided to wait till the sun is gone. In the evening I started and found it difficult to increase speed. Also here the tires bounced a bit exceeding the 70 km/h. I did try but the fastest time was  81,4 km/h when I was decreasing in speed the windscreen fogged up only a small piece directly behind the incomming wind out of the tube stayed open. This was enough to finish without crashing. The humidity was 100%. After opening up the bike I realized that my glasses were completely fogged too. 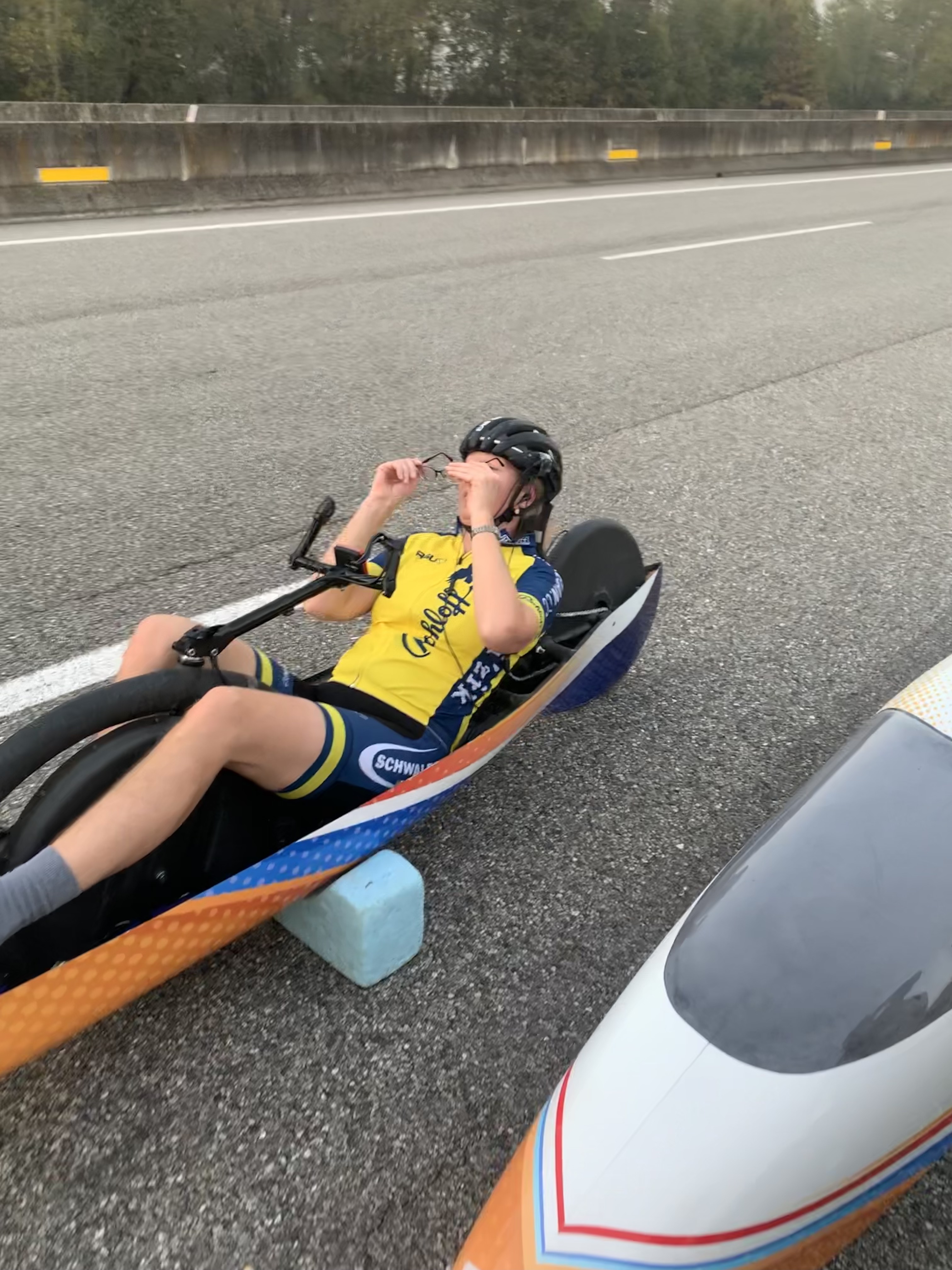 Sunday we are in front of the track again at 8:00. Today it is cloudy and I start as soon as possible. First Hans tried to fix the tires. After I started for the hour in the first curve it started to drip, in the second curve the windscreen was full of drops and I started to drive exactly on the line. Hans gave me instructions to help me through the last curve and to the catching area. Now we had to wait for dry weather and then I started again. This time I cound not get the bike easily above the 70 km/h. After 5 laps the sun came through making visibility problematic and I had to stop. 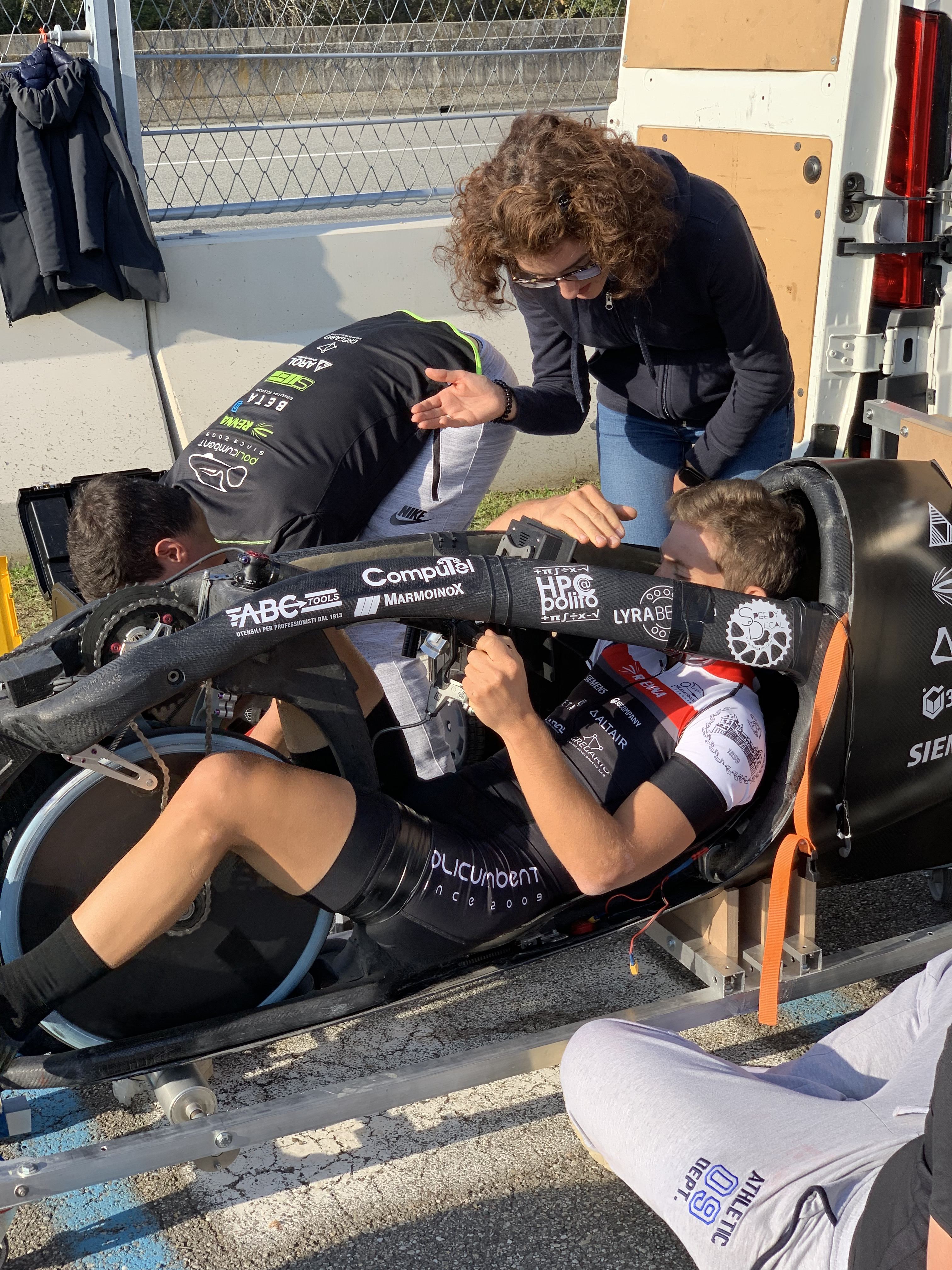 We could do one more test this weekend. We blocked the window with cloths to the point that I could still see just enough and taped of the part that could be blocked. At the same time Vittoria was attempting a 200m record. She had a good start and came trough after the first lap around 75 km/h. We all hoped that the next lap would be faster. Then we heard that she had crashed, but she was ok. Now I did the test of riding with the partly blocked window. This was a success, which means we can use a lot smaller window. That is easier to build. Now Andrea started his sprint attempt. His speed was 103.8km/h. 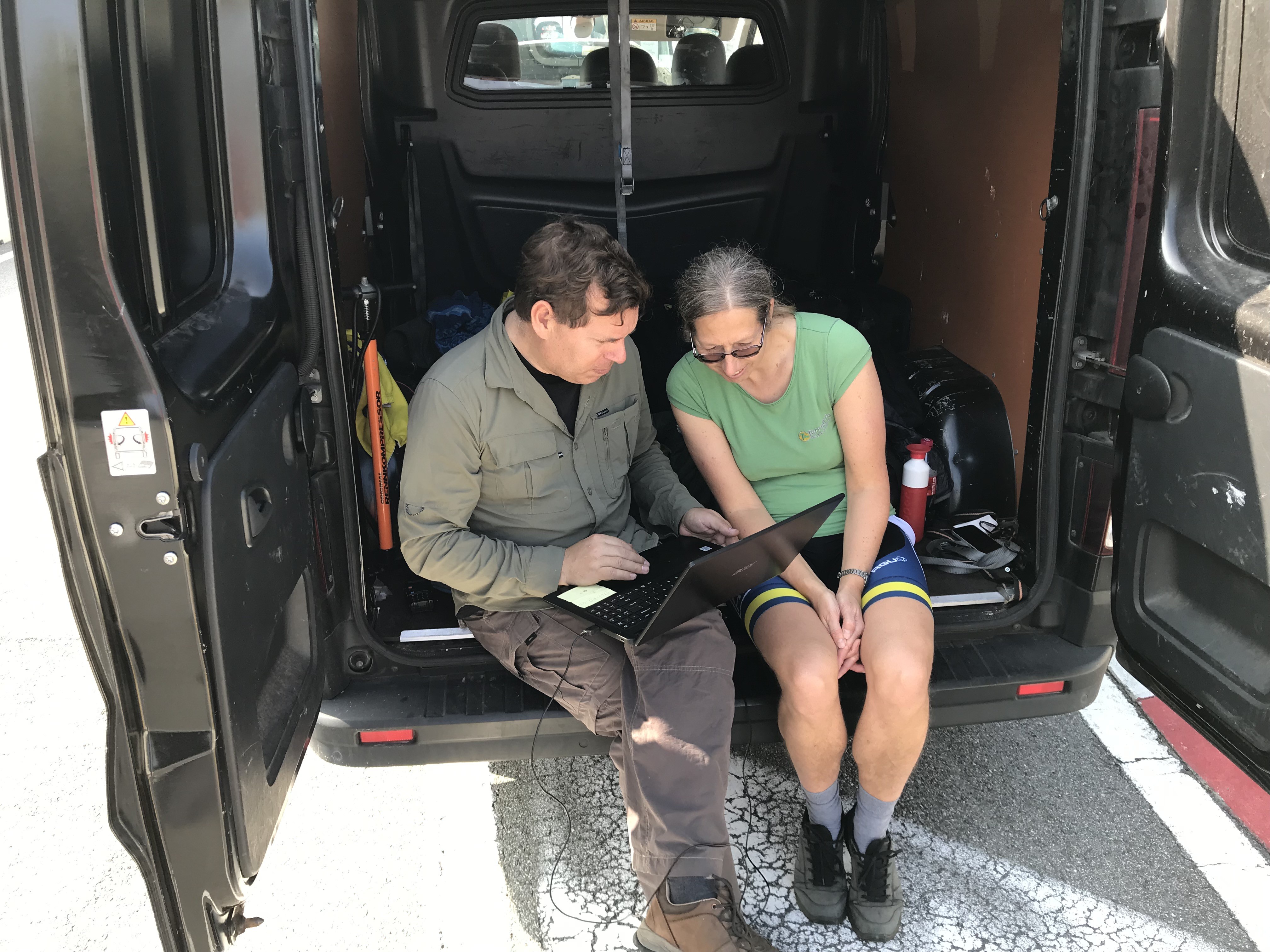 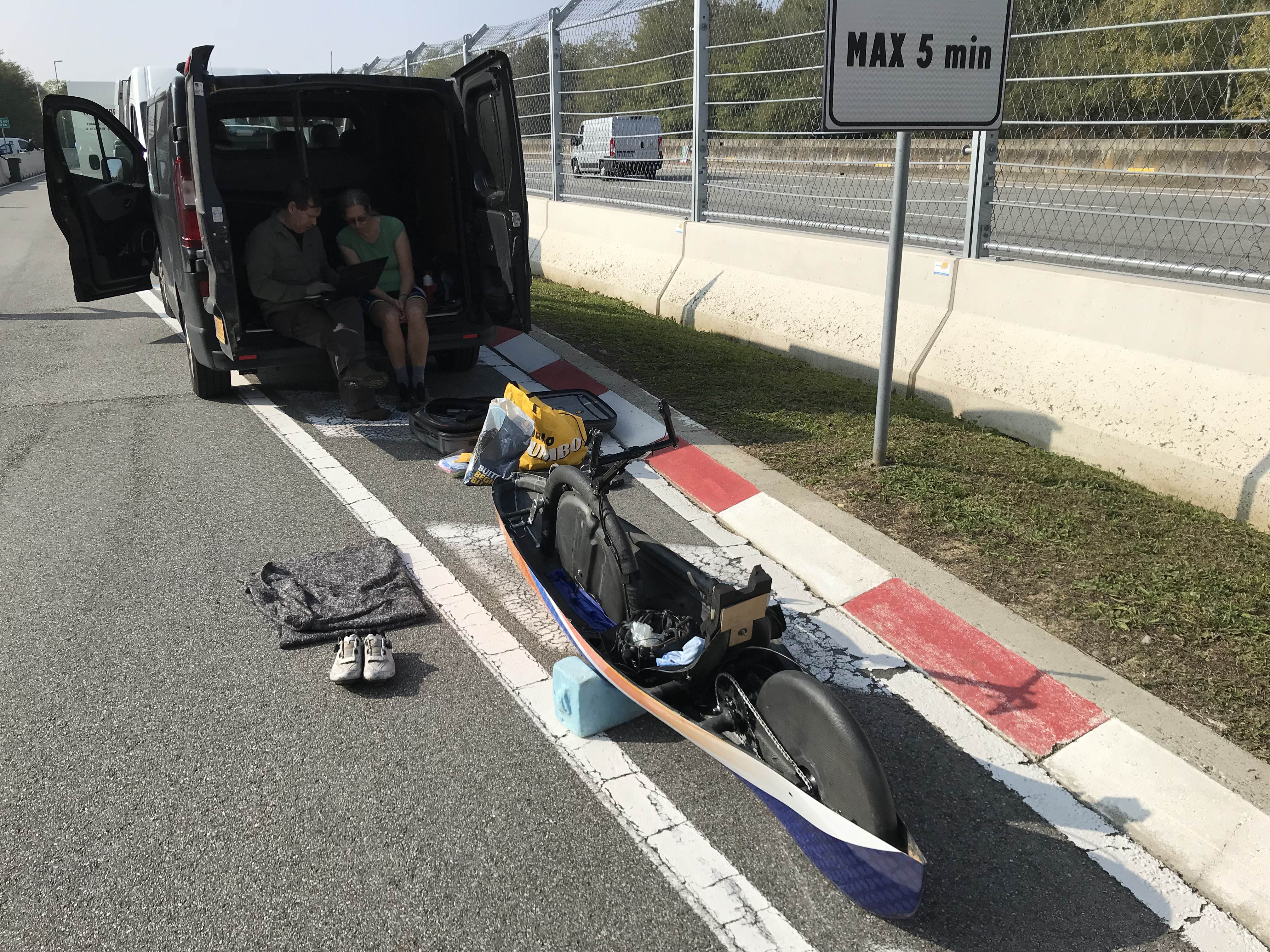